BHUTAN AND THE UNITED NATIONS 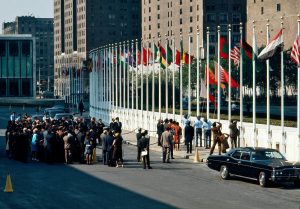 As a small landlocked developing country, multilateral engagement is an important aspect of Bhutan’s foreign policy in every sphere affecting humanity. The first multilateral organization Bhutan joined was the Colombo Plan in 1962. This membership enabled Bhutan to avail of the much-needed technical and economic assistance to carry out its development plans. Bhutan’s membership to the United Nations in 1971 is the biggest milestone in its multilateral engagement. As a small state, Bhutan deeply values its membership in the UN for the pride of sovereign equality that it accords and opportunity to participate in international development. Underpinned by the values of Gross National Happiness (GNH), Bhutan remains committed to upholding and advancing the principles of the UN Charter to maintain international peace and security, human rights and development.

On 21 September 2021, Bhutan completed its 50th year of membership in the UN. Despite the changed realities since the UN was established in 1948, Bhutan firmly believes that the UN as the quintessential seat of global multilateralism is best positioned to mobilize collective action to address and resolve contemporary problems facing humanity.

Over the years, Bhutan has been involved in the numerous bodies of the UN. Bhutan has served on many important posts such as:

2021 marks the 50th anniversary of Bhutan’s membership to the United Nations. The United Nations and International Organizations have been an integral part of Bhutan’s incredible journey of modernization. Bhutan today is on the cusp of graduating to a middle income country. Read More

Registration of Bhutanese residing in Europe