Find the latest bookmaker offers available across all uk gambling sites www.bets.zone Read the reviews and compare sites to quickly discover the perfect account for you.
Breaking News
Home / Background

The Permanent Mission of the Kingdom of Bhutan to the United Nations in New York (PMB NY) is one of the eight resident diplomatic missions that the Royal Government of Bhutan maintains overseas.

PMB NY is one of the three multilateral posts that represent Bhutan’s interests in the United Nations system.  In addition to UN Headquarters in New York, Bhutan also maintains resident missions to the UN Office in Geneva, and UN-ESCAP in Bangkok.

The Mission was established in 1971 following the admission of Bhutan as a member of the United Nations.

The Mission has three important mandates:

The objectives of the Mission are: 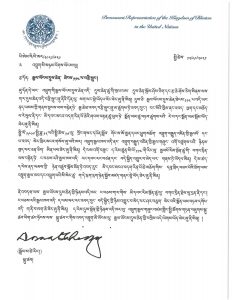