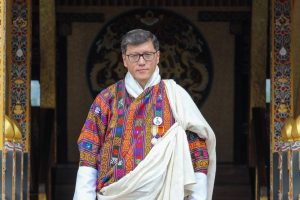 Sonam Tobgay was appointed as the Ambassador of the Kingdom of Bhutan to the Commonwealth of Australia on 2 July 2021 by His Majesty Jigme Khesar Namgyel Wangchuck, the King of Bhutan. He presented his credentials to His Excellency General the Honourable David Hurley AC DSC (Retd), the Governor-General of the Commonwealth of Australia on 29 September 2021.

Prior to the appointment, he was the Director of the Bilateral Department from February 2019. He joined the Ministry in 1994 and has served in various capacities. These include as the Deputy Chief of Mission at the Royal Bhutanese Embassy in New Delhi; Consul General & Minister Counselor at the Permanent Mission of Bhutan to the UN in New York; Chief of Policy Planning Division; and Chief of International Organizations Division in Thimphu. He also briefly served as Charge d’Affaires at the Royal Bhutanese Embassy in Kuwait and as Second Secretary at the Permanent Mission of Bhutan in Geneva.

He received his BA from Delhi University, MA in Diplomacy &; MA in Public Policy from the Australian National University, and his MPA from Harvard University. In 2014, he took a sabbatical and was a Fellow with the McCain Institute for International Leadership during which time he worked with the Mayor of Kansas City, Missouri.

He is married to Tshering Ohm Dorji and they have two sons. His hobbies include reading and hiking.