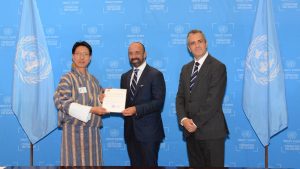 The deposit of the instrument of ratification marks the completion of all necessary processes for Bhutan to formally join the Paris Agreement of 2015 and be Party to the Agreement.

The Paris Agreement is the first of its kind, where countries have come together to agree on a path forward on Climate Change. The objectives set out in the Paris Agreement resonate well with the initiatives undertaken by Bhutan in its endeavours to preserve its pristine environment i.e. one of the four pillars of Gross National Happiness. It is an acknowledgement of the exemplary role taken by Bhutan towards sustainable development, in particular to maintain 70 per cent of its geographical area under forest covers for the well being of the global community and for the future generation.