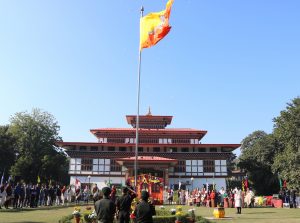 The Royal Bhutanese Embassy in New Delhi is located on the Chandragupta Marg, Chanakyapuri, in New Delhi.

Following the establishment of formal diplomatic relations between Bhutan and India in January 1968, the then Royal Bhutan Mission was established in the Shantineketan area in New Delhi. The Mission was later moved to the current location at Chanakyapuri diplomatic area after the construction of the Chancery on the plot that was given to Bhutan by the Government of India. The Royal Bhutan Embassy in New Delhi at its current location was inaugurated on 17th May 1971. Subsequently, the Offices of Special Representatives in the two capitals were upgraded to full-fledged embassies in 1978.

The Royal Bhutanese Embassy plays an extremely important role in deepening the close friendship and understanding between the two countries and continuously move forward the bilateral relationship in the direction that results in tangible benefits for the people of the two countries.

In addition to bilateral relations with India, the Royal Bhutanese Embassy covers Japan, Nepal and Afghanistan and the Ambassador is concurrently accredited to these three countries. The Royal Bhutanese Embassy also works closely with the Embassies of countries with whom Bhutan has diplomatic relations as well as those without formal diplomatic relations, including the Embassies of the P5 countries that are based in New Delhi. Further, the Embassy also engages closely with specialized agencies of the United Nations and other international organizations, and regional offices in New Delhi.

The National Railway Museum of India is one of the landmark areas located in close proximity to the Embassy. The Embassies/High Commissions of New Zealand, the Philippines, Nigeria, Singapore, Thailand are within a few minutes of walking distance from the Embassy.