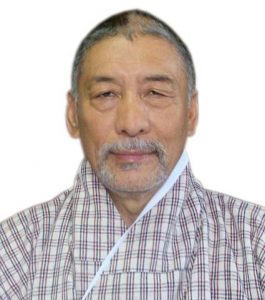 Ambassador Major General Vetsop Namgyel was born on 15th August 1952 in Pangbisa Village in the District of Paro, Bhutan.  He completed his Senior Cambridge from St. Joseph’s College, North Point, Darjeeling in West Bengal, India in 1969.  After enrolling for a Degree Course in St. Joseph’s College, North Point, he was called upon to join the Royal Bhutan Army and was commissioned from the Indian Military Academy in December 1972.  He was selected for the Royal Body Guards in 1973 and was appointed as Aide-de-Camp to His Majesty Jigme Singye Wangchuck, the Fourth King of Bhutan during the Royal Coronation in June 1974.  Since then, he worked as a member of the Royal Secretariat as well as an officer of the Royal Body Guards.  After his promotion to the Rank of Colonel in 1989, he functioned both as Military Secretary and Principal Aide-de-Camp to His Majesty the King.

Major General Vetsop Namgyel has accompanied His Majesty Jigme Singye Wangchuck on all His official and state visits to India from 1974 to 2006.  He has also been a member of Bhutan’s delegation to all the Summits of the Non Aligned Movement from 1976 to 1989 and the Summits of the South Asian Association for Regional Cooperation from 1985 to 1997.  As a senior member of the Royal Secretariat, he worked closely with all the Secretaries and Ministers of the Royal Government of Bhutan, in particular with the ministries of Home and Foreign Affairs.  In his capacity as Military Secretary, he coordinated all important security related activities and operations by the Royal Bhutan Army.  He was awarded the highest military decoration, the Druk Yugyel Medal on 17th December 2004 and promoted to the Rank of Major General on 4th November 2005.  He was conferred the prestigious national award, the Druk Thuksey Medal, on 17th December 2010 by His Majesty the King.

Major General Vetsop Namgyel presented his credentials as Ambassador of Bhutan to India on 16 January 2009.

Major General Vetsop Namgyel is married to Daw Zam and they have one son and two daughters. His favourite hobbies are reading, listening to music and playing golf.