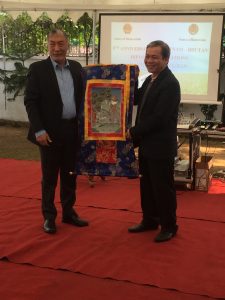 To celebrate the 5th anniversary of the establishment of diplomatic relations between Bhutan and Vietnam, the Embassy of the Socialist Republic of Vietnam, New Delhi organized a daylong event on 1 January 2017. In the morning a friendly golf event was held at the Jaypee Wish Town golf course where Ambassador Maj. General V. Namgyel of Bhutan and Ambassador Ton Sinh Thant of Vietnam participated along with officials from the two Embassies.

In the afternoon the two Ambassadors along with officials, staff and family members from the two Missions gathered at the compounds of the Embassy of the Socialist Republic of Vietnam for a cultural event.

The next event to celebrate the anniversary will be hosted by the Royal Bhutanese Embassy.

Diplomatic relations between the Kingdom of Bhutan and the Socialist Republic of Vietnam was established on 19 January 2012.