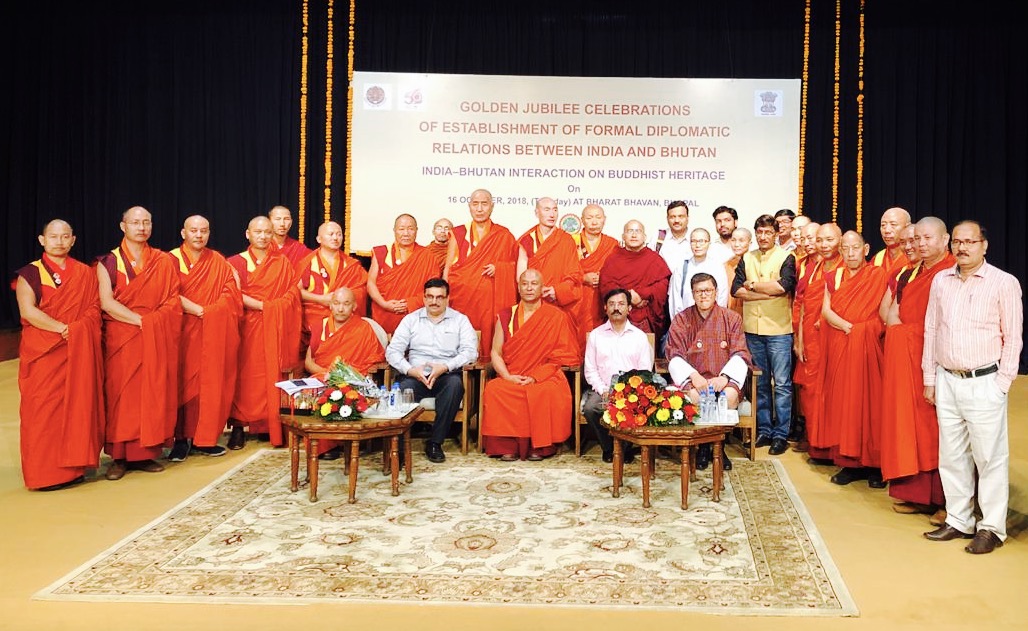 As part of the 50th Anniversary Celebrations, 18 Lam Netens and representatives of the Central Monastic Body from Bhutan are on a two-week visit to India starting from 15th October 2018 at the invitation of the Embassy of India in Bhutan and the Ministry of External Affairs of India.

The Lam Netens started their visit to Bhopal, the capital city of Madhya Pradesh. While in Bhopal, they visited the Sanchi Stupa. They will also visit several other sacred Buddhist pilgrimage sites such as the Ajanta and Ellora Caves. In addition, they will visit sacred Hindu Temples and other religious and cultural sites in different parts of India.

In Bhopal, Ministry of External Affairs with the Government of Madhya Pradesh organized the ‘India-Bhutan Interaction on Buddhist Heritage’ at the Bharat Bhavan for the Lam Netens. Two representatives of the Central Monastic Body made presentations on the Sangha of Bhutan and the common Buddhist spiritual heritage between India and Bhutan. The presentation were well received by the audience that included representatives of the Madhya Pradesh Government, students of Sanchi University and Bhutanese students studying in Bhopal. Other participants at the event were from the Ministry of External Affairs, the Madhya Pradesh Government and the Royal Bhutanese Embassy in New Delhi.

The visit by the Lam Netens to India will strengthen the spiritual and cultural bonds as well as further enhance people-to-people relations between India and Bhutan.