Celebrating First Birth Anniversary of His Royal Highness The Gyalsey 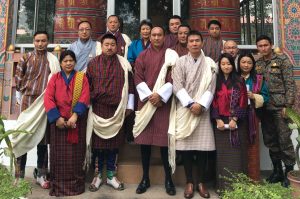 The Royal Bhutanese Embassy joined the Nation in celebrating the joyous occasion of the First Birth Anniversary of His Royal Highness The Gyalsey Jigme Namgyel Wangchuck on 5 February 2017.

The officers and staff of the Royal Bhutanese Embassy offered butter lamps and recited prayers at the Embassy Lhakhang and also released live fish as Tshe-Thar in the River Ganga for the good health, long life and happiness of His Majesty The King, Her Majesty The Gyaltsuen and His Royal Highness the Gyalsey.

2017-02-06
sangay
Previous Visit to New Delhi by Lyonpo Leki Dorji, Minister for Economic Affairs, Royal Government of Bhutan
Next Signing Ceremony of Exchange of Notes under the Japanese Grant Aid