Signing Ceremony of Exchange of Notes under the Japanese Grant Aid 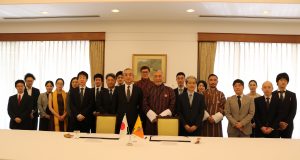 On 3 March 2017 in New Delhi, Ambassador V. Namgyel of Bhutan and Ambassador Kenji Hiramatsu of Japan signed the Exchange of Notes under the Japanese Grant Aid ‘The Project for Improvement of Medical Equipment at the National and Regional Referral Hospitals’ with assistance amounting to 551 million Yen.

Speaking at the signing ceremony held at the Japanese Embassy in New Delhi, Ambassador V. Namgyel conveyed the appreciation of the Royal Government of Bhutan to the Government of Japan for its steadfast support to Bhutan’s development for many years that has contributed to improving the quality of life of the Bhutanese people. He said that these four grant projects will further enhance the delivery of quality health services and reinforce the quality of life of the people of Bhutan by improving medical facilities, improving boarding facilities for girls and agricultural development in Bhutan.