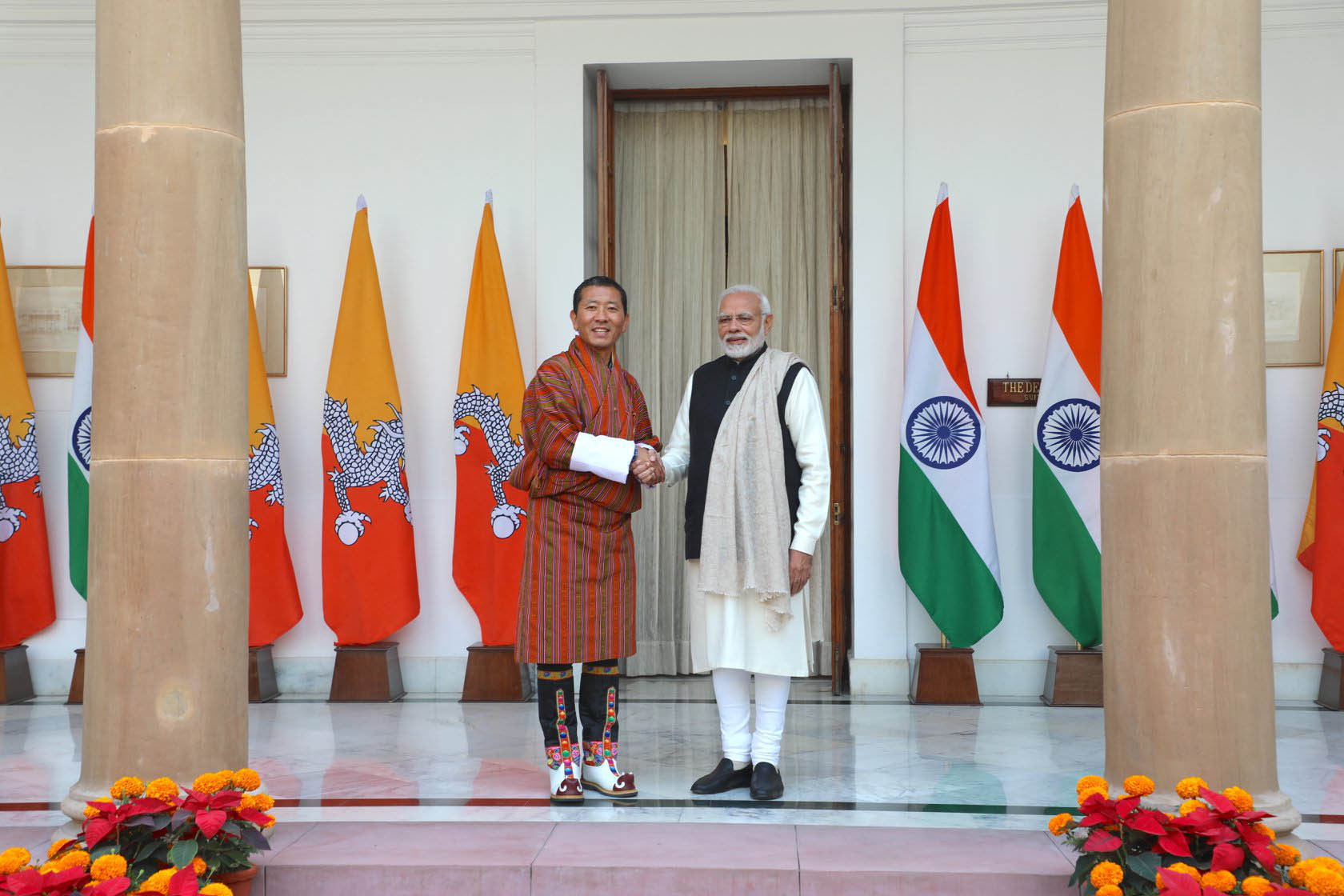 1. At the invitation of Prime Minister Shri Narendra Modi, His Excellency Lyonchhen Dr. Lotay Tshering is on a State visit to India from 27-29 December 2018. He is accompanied by Lyonpo Dr. Tandi Dorji, Minister for Foreign Affairs, Lyonpo Loknath Sharma, Minister for Economic Affairs and senior officials from the Royal Government of Bhutan.

2. This is Prime Minister Dr. Lotay Tshering’s first overseas visit after assuming the office in November 2018. The visit is taking place during the Golden Jubilee year of the establishment of formal diplomatic relations between India and Bhutan, and is in keeping with the tradition of regular high-level exchanges between the two countries.

4. The two Prime Ministers held detailed discussion on a wide range of bilateral and regional issues of mutual interest. They expressed satisfaction at the excellent state of bilateral ties of friendship and cooperation, which are marked by utmost trust, mutual understanding, goodwill, respect for each other’s interests, and reinforced by robust people to people linkages and close economic and development partnership.

5. The two Prime Ministers acknowledged the contribution of commemorative events organized in the Golden Jubilee year to strengthen the close bonds of friendship and understanding between the Governments of peoples of the two countries. In this regard, they recalled the vision and guidance of the Druk Gyalpos of Bhutan and successive political leadership in India and Bhutan in nurturing and enhancing close ties of friendship and cooperation between the two countries.

7. Prime Minister Dr. Lotay Tshering thanked Prime Minister Shri Modi for the invitation to visit India and for the warm reception accorded to him and his delegation. He recalled the unique and historical ties of friendship and understanding that exist between the two countries and that he looked forward to working with the Government of India to further strengthen bilateral ties.

8. The two sides discussed the Government of India’s development assistance package for Bhutan’s 12th Five Year Plan for the period 1 November 2018 to 31 October 2023. PM Shri Modi conveyed that India will provide grant assistance of INR 4500 Crore towards Bhutan’s 12th Five Year Plan, and a transitional Trade Support Facility of INR 400 Crore over a period of five years to strengthen bilateral trade and economic linkages. Prime Minister Dr. Lotay Tshering conveyed the deep appreciation of the people and the Royal Government of Bhutan to the people and Government of India for India’s continued support to Bhutan’s economic development. The two sides also discussed Bhutan’s priorities in the health sector.

9. Recognizing the importance of further expanding economic co-operation, the two Prime Ministers reviewed the implementation of ongoing bilateral hydro-power projects in Bhutan, and agreed to expedite their implementation. They reiterated their commitment to jointly develop 10,000 MWs of hydropower generating capacity in Bhutan and in this regard discussed the Sankosh Hydropower Project.

10. The two Prime Ministers expressed satisfaction at the progress of the 720 MW Mangdechhu hydro-power project in Bhutan, and looked forward to its early commissioning. They welcomed the mutually beneficial understanding reached between the two sides on the tariff for the export of surplus power from Mangdechhu project in Bhutan to India.

11. The two Prime Ministers reaffirmed their commitment to further strengthen co-operation in all areas of mutual interest and to take the bilateral partnership to newer heights.

13. The meetings were held in a warm and friendly atmosphere, reflecting the spirit of trust, co-operation and understanding that characterize the unique and special nature of relations between the two countries.