Office of the Foreign Minister 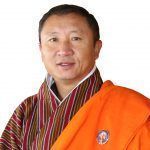 Dr. Tandi Dorji was appointed as the Minister for Foreign Affairs of Bhutan on 10 November 2018. He is the founding member of Druk Nyamrup Tshogpa, the current ruling party governing Bhutan.

Foreign Minister has several publications to his credit. He published two books i.e. History of Medicine in Bhutan co-authored with Dr. Bjorn Melgaard which was published in 2012 and another one titled Drukyul Decides; In the minds of Bhutan’s first voters with Gyambo Sithey published in 2009. He also published Manual on Control of Rabies & Clinical Management of Rabies in 2008 and Manual on Management of Malnutrition for Health Workers in 2007. He has also published articles titled Impact of WTO and TRIPS on price & accessibility of essential drugs in Bhutan in 2007, HIV & Youth and Working for Health in 2006.

He is married to Karma Choden and they have two daughters. Dr. Tandi Dorji speaks Dzongkha, English, Hindi, Nepali and Bangla.