Office of the Foreign Secretary 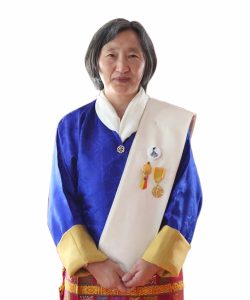 Ambassador Pema Choden was appointed Foreign Secretary of Bhutan on 6 November 2021. She served as the Director General of the Department of Multilateral Affairs from March 2021.

Prior to this, she served as Bhutan’s resident Ambassador to Belgium and the European Union with concurrent accreditation to Sweden, the Netherlands, Denmark, Finland and Spain from April 2016 to January 2021.

She previously served as the resident Ambassador of Bhutan to Bangladesh with concurrent accreditation to the Maldives, Pakistan, South Korea, and Sri Lanka from April 2014 to March 2016.

She joined the Ministry of Foreign Affairs in 1989 and has served in various capacities including as the Head of the Policy and Planning Division; Chief, Europe, Americas & Africa Division in the Department of Bilateral Affairs; Assistant Director, Bilateral Division; Attache, Bilateral and Multilateral Division; and Trainee Officer in the Conference Division. She has also served at the Permanent Mission of Bhutan to the UN in Geneva and the Royal Bhutanese Embassy in Dhaka.

She served on deputation as the Managing Director of the Bhutan Broadcasting Service Corporation, Thimphu from 2007 to 2011.

She is married with three children.