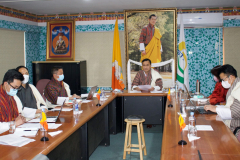 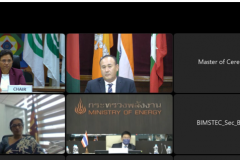 The Third BIMSTEC Ministers’ Meeting on Energy was held by the Government of Nepal on 20 April 2022 in a virtual mode. The Bhutanese delegation was led by the Secretary, Ministry of Economic Affairs, Royal Government of Bhutan.

The Ministers’ Meeting was preceded by the Fifth Meeting of BIMSTEC Senior Officials on Energy on 19 April 2022. The Bhutanese delegation was led by Director, Department of Hydropower and Power Systems, Ministry of Economic Affairs.

Bhutan welcomed the progress made towards undertaking the BIMSTEC Grid Interconnection Master Plan Study and the operationalization of the BIMSTEC Energy Center. Considering the region’s high dependency on non-renewable energy, Bhutan expressed the urgency required from all Member States to collectively work towards adopting a sustainable approach to achieving energy security and greater economic integration in the region. Bhutan also called upon all the Member States to seize the opportunity to move beyond the conventional means of developing and trading energy by harnessing available resources in a cost-effective and efficient manner.