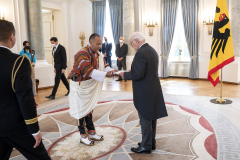 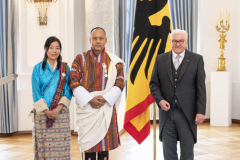 Kutshab Tshering Gyaltshen Penjor conveyed the greetings of His Majesty the King, the people and the Royal Government of Bhutan to the Federal President and to the German people. He conveyed the appreciation of the Royal Government for the generous support that Bhutan has received from Germany, bilaterally and multilaterally, in the past few decades. He expressed the hope to further strengthen the bilateral relations and enhance the existing cooperation into new spheres of private sector, trade and investment partnerships.

The Federal President welcomed Kutshab’s appointment as the First Ambassador of Bhutan to Germany and expressed the hope that the friendly relations between the two countries would be further strengthened.

Formal diplomatic relations between Bhutan and Germany were established in November 2020. However, cooperation between the two countries dates back to the early 1970s.

Kutshab Tshering Gyaltshen Penjor is the resident Ambassador to Belgium and the European Union with concurrent accreditation to Denmark, Finland, Germany, the Netherlands, Spain and Sweden.