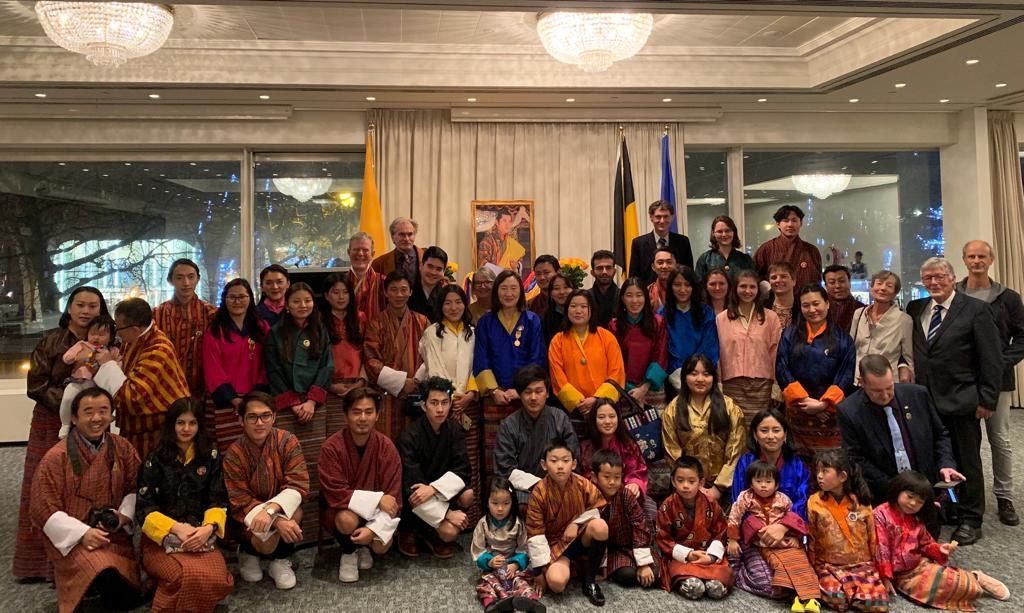 The Royal Bhutanese Embassy in Brussels commemorated the auspicious occasion of the 112t h National Day of the Kingdom of Bhutan at reception on 13t h December 2019 at The Hotel in Brussels.

The Guest of Honour, Ms. Paola Pampaloni, Deputy Managing Director, Asia and the Pacific Department, European External Action Service addressed the event, highlighting the excellent relations between Bhutan and the European Union. She spoke most positively about her interaction with the Royal Government of Bhutan as head of the EU delegation to the Biennial Consultations held in Bhutan in November 2019, and the mutual decision to make the Consultations an annual event, reflecting the close and successful cooperation and engagement between Bhutan and the EU.

The reception was graced by 200 invitees including senior officials of the Belgian Government, the European Union institutions, members of the diplomatic corps, academics, members of the business community, and Bhutanese residing in the EU. Members of the friendship societies of Bhutan from Belgium, France, Germany, Hungary, the Netherlands, Poland, Sweden and the United Kingdom attended the occasion.

16 Bhutanese students on EU scholarships studying in Germany, the Netherlands, Portugal, Spain and Sweden were able to participate in the celebration with the support of the Embassy.

The Embassy also hosted a lunch for the members of the Friendship Societies of Bhutan and the Bhutanese students on 14t h December 2019 at the Embassy.

NOTIFICATION ON SPECIAL FLIGHTS FOR EVACUATION OF BHUTANESE FROM ABROAD

TRAVEL ADVISORY, NOTIFICATION AND RESPONSES ON TRAVEL QUERIES ON COVID-19

Travel Advisory on Prevention of COVID-19 issued by the Ministry of Health, Bhutan.

As COVID-19 has been declared pandemic by the WHO, Ministry of Health would like to ...