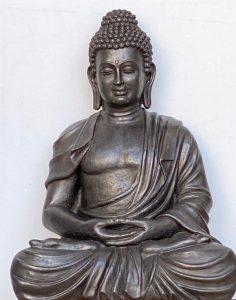 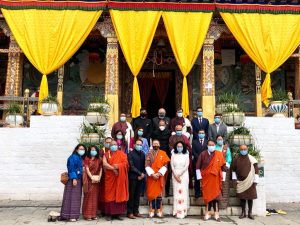 “No one saves us but ourselves. No one can and no one may. We ourselves must walk the path.: Gautam Buddha”
Coinciding with the auspicious occasion of the birth anniversary of Guru Rinpoche, the Embassy of India, Thimphu and the Indian Council for Cultural Relations hosted two important events in collaboration with the Royal Government of Bhutan and the Privy Council of Bhutan.
The first event, held on 19 June 2021 on the eve of the birth anniversary of Guru Rinpoche, was a special function on a digital platform on the handing over of a statue of Lord Buddha, as a gift from the Government and people of India to the Government and people of Bhutan. The function commenced with solemn prayers and blessings by His Eminence Tshugla Lopen Karma Rangdrol and His Eminence Laytshog Lopen Sangay Dorji and monks of the Zhung Dratshang (Central Monastic Body). Dr. Vinay Sahasrabuddhe, Member of Parliament and President, Indian Council for Cultural Relations and Dr. Tandi Dorji, Hon’ble Foreign Minister of Bhutan as well as the Ambassador of India to Bhutan, Ruchira Kamboj and Director General, ICCR, Dinesh Patnaik addressed the handing over ceremony. At the conclusion of the event, Dr. Vinay Sahasrabuddhe, President ICCR ‘gifted’ the statue of Lord Buddha to Dr. Tandi Dorji, Foreign Minister of Bhutan.
The second event was the consecration and enshrining ceremony of the statue of Lord Buddha that took place at the magnificent Grand Kuenrey of the Tashichhodzong on 20 June 2021 to commemorate the birth anniversary of Guru Rinpoche. The Kuenrey of the Tashichhodzong is its most beautiful and elaborate hall, used for prayers and important ceremonies. The main statue within the Kuenrey is a gigantic golden Buddha, and the walls are adorned with elaborate Buddhist paintings, as well as 1008 Buddhas in statues and images. Over the years, the Grand Kuenrey has been the select venue for important ceremonies and events, including the reception of important state guests, offerings of butter-lamps and prayers by His Majesty and the Royal Family, and the commemoration of significant royal events.

A Jaling and Phoepho procession was held to receive the statute of Lord Buddha at the Tashichhodzong. 300 monks of the Tashichhodzong chanted prayers and presided over the rituals of the consecration ceremony at the Kuenrey. Ambassador of India to Bhutan Ruchira Kamboj ceremonially handed over the statue of Lord Buddha to the Foreign Minister of Bhutan Dr. Tandi Dorji in the presence of members of the Chairman and Councillor of the Privy Council, senior officials from the Ministry of Foreign Affairs of Bhutan and revered Lopens of the Zhung Dratshang. Lighting of butter lamps followed by the Zhingshey Pemai Kuncham (Masked Dance) marked the joint celebrations of the consecration and Guru Rinpoche’s birth anniversary.

The statue is a subtle smiling 3.3 feet tall bronze cast statue of Lord Buddha in a lotus pose, weighing approximately 200 kgs. and designed by renowned sculptor Naresh Kumar Kumawat who has many awards to his credit. The statue is a single cast unit, quite unique in terms of posture and facial expression.
The consecration of the statue of Lord Buddha at the Kuenrey of the Tashichhodzong is a true reflection of the deep cultural connect and strong people-to- people links between India and Bhutan.
Embassy of India Thimphu
20.6.2021
2021-06-20
Tashi Choden
Previous Signing of MoU on ‘Cooperation in the Areas of Environment’ between the Royal Government of Bhutan and Government of India
Next Press Release 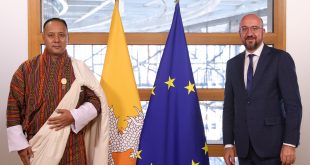 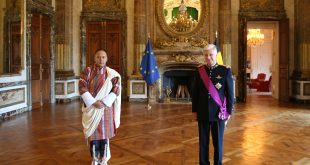 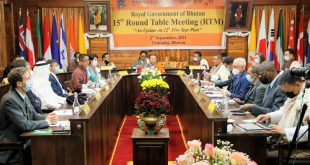