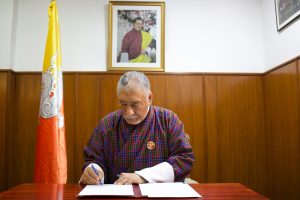 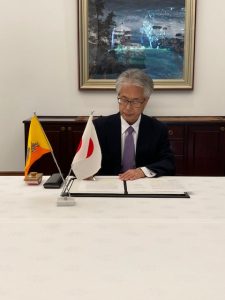 Ambassador of Bhutan to Japan V. Namgyel and Ambassador of Japan to Bhutan Satoshi Suzuki signed the Exchange of Notes for the Project for the Development of Digital Topographic Map on 22nd October 2021 in New Delhi.

For the project, the Government of Japan will provide a grant of Yen 796 million to the Royal Government of Bhutan to develop a digital topographic map of the parts of Bhutan that are not digitally mapped. The digital topographic map will provide updated and reliable geospatial information including accurate coordinate data which will benefit numerous sectors including agriculture, land management, environment, infrastructure development and disaster prevention.

The Government of Japan has been generously supporting Bhutan in many different areas, such as agriculture, telecommunications, rural electrification, construction of bridges, building of schools, providing farm machinery fire engines, police patrol cars, compactor trucks, ambulances and medical equipment. The Royal Government of Bhutan also deeply appreciates the recent support received from the Government of Japan to fight against the spread of Covid-19.

The project, which will be implemented by the National Land Commission Secretariat, will further strengthen the excellent bonds of friendship, understanding, and cooperation that exist between Bhutan and Japan.