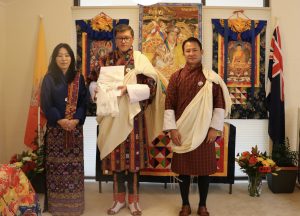 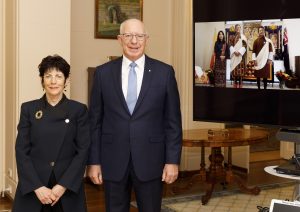 During the virtual ceremony, the Ambassador conveyed the warm greetings of His Majesty The King and Her Majesty The Gyaltsuen, and the best wishes of the people and Royal Government of Bhutan to His Excellency the Governor General and to Her Excellency, Mrs. Hurley. He added that the new Embassy will build on the strong foundations of the bilateral relations that have been nurtured between Bhutan and Australia for the past six decades, and assured the Governor-General that it will endeavor to further strengthen the excellent relations between Bhutan and Australia.

The relations between Bhutan and Australia date back to 1962 when Bhutan was just emerging from self-imposed isolation and starting to engage with the rest of the world. Australia’s support at the time  was instrumental in Bhutan being admitted as a member of the Colombo Plan. Subsequently, Australia was among the first countries to  support and welcome Bhutan’s membership to the United Nations in 1971. From then on, the friendship between the two countries has grown with each passing year and it culminated in the establishment of diplomatic relations on 14 September 2002.

Today, Human Resource Development and education are the main areas of cooperation between Bhutan and Australia. In the past decade, Australia has become a preferred educational destination for thousands of Bhutanese, most of whom have returned home and contributed to nation-building. Australia has today the largest number of Bhutanese citizens living abroad.

Ambassador Sonam Tobgay will present his credentials to the Governor-General in person at an appropriate time after the current lockdown in Canberra is lifted.