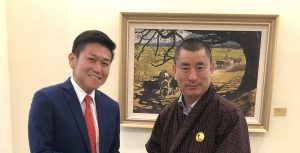 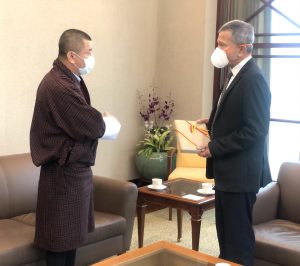 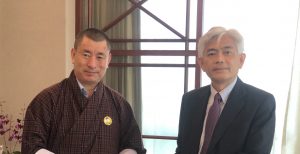 Ambassador Kinzang conveyed the deep appreciation of the Royal Government and people of Bhutan to the Government of Singapore for its invaluable support to Bhutan, particularly in human resource development, and recently during the Covid-19 pandemic. Discussions were also held on the ongoing cooperation between Bhutan and Singapore and ways to further strengthen relations between the two countries. During the meetings, he also exchanged ideas on the activities to commemorate 20 years of diplomatic relations between Bhutan and Singapore. The year 2022 marks 20 years of diplomatic relations between the two countries.

While in Singapore, Ambassador Kinzang visited the ITE College West and held extensive discussions with Mr. Bruce Poh, Chief Executive Officer, ITE Education Services (ITEES) and other officials, on the ongoing collaboration between the RGoB and the ITEES as well as possible ways to further enhance cooperation in the field of technical and vocational education. He conveyed the RGoB’s appreciation to the ITEES for its support to establish Model Technical Training Centers (MTTCs) in Thimphu and a Technical Training Institute (TTI) in Khuruthang, Punakha.

Ambassador Kinzang also took the opportunity to meet several friends and well-wishers of Bhutan in Singapore.